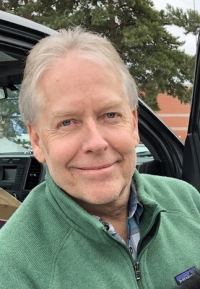 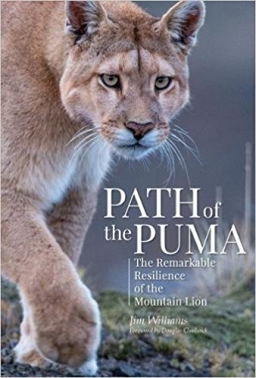 The Remarkable Resiliance of the Mountain Lion
Published by Patagonia Books
Buy from:

During a time when most wild animals are experiencing decline in the face of development and climate change, the intrepid mountain lion—also known as a puma, a cougar, “ghost cat,” and by many other names—has experienced reinvigoration as well as expansion of territory.

In Path of the Puma: The Remarkable Resilience of the Mountain Lion (Patagonia Books, October 9, 2018),wildlife biologist Jim Williams celebrates wildlife research and conservation of ghost cats from Canada’s southern Yukon Territory to Tierra del Fuego in Argentina and Chile, exploring what makes this cat, the fourth carnivore in the food chain—just ahead of humans—so resilient and resourceful. He shares stories of magical landscapes, remarkable wildlife habitats, and the people who work to protect them.

Big, wild cats worldwide are threatened and endangered—fewer than 20,000 lions persist in all of Africa; as few as 15,000 jaguars remain in the wild; and the global census of tigers has dipped below 4,000. And yet, the mountain lions of North America and the pumas of South America are thriving, re-wilding entire continents.

Two centuries ago, the mountain lion’s range sprawled from coast to coast in North America. However, the big cats were exterminated from most of it by government-supported campaigns that relied heavily on poisoned baits and bounty hunters. As the decades passed and attitudes toward meat-eating wildlife changed, mountain lion numbers started to rally across the western states. Now Puma concoloris the most widespread large mammal in the western hemisphere. The resurgence of this apex carnivore through the late twentieth century stands as one of the most remarkable wildlife comebacks in US history.

Williams writes, “They are beating the odds, and their success provides a remarkable opportunity for wild nature to regain a toehold and to shape possibilities for the persistence of natural systems. They are hope for those of us who believe our future will depend, in large part, on finding the wild.”

Williams has spent his career working with local communities to conserve mountain lions, bears, wolves, large ungulates and their critical habitats from Montana’s Crown of the Continent ecosystem to the Patagonian wilds of Argentina and Chile. He has worked for Montana’s Department of Fish, Wildlife, and Parks for over 27 years, and with biologists in Patagonia on a variety of wildlife conservation projects. In the second half of the book, Williams takes readers to that far southern range as he joins researchers in ecosystems where the puma’s neighbors include pampas cats, kodkods, maned wolves, guanacos, vicunas, flamingos and condors.

In the foreword, Douglas Chadwick describes Path of the Puma as the “Jim Williams high-octane combo of science, adventure, and conservation . . . all related to his decades-long pursuit of a special interest in cougars, with each chapter uncovering more aspects of the lives the big cats work so hard to conceal.”

Path of the Puma doesn’t sugarcoat the risks of predators living amongst us—mountain lions live at the intersection of our landscapes, our livelihoods, and our lifestyles—but points out that predator-less deer also pose a threat to humans, as overpopulated herds are responsible for the spread of tick-borne diseases and collisions with vehicles. Williams explains the balance of an ecosystem, telling readers to “think about carnivores . . . but most importantly think about their prey, and the grass the prey need, and the soil the grass needs. Conservation happens best from the ground up, when the whole system is intact.”

Path of the Puma applauds the impassioned champions—wildlife advocates, hikers and hunters, anglers and philanthropists, and biologists—who fought and advocated and lobbied for the creation of protected lands where wildlife can thrive. Williams highlights the effectiveness of wildlife corridors in Montana—the underpasses, culverts, and bridges that connect habitats for lions, grizzly bears, caribou, wolverine, and other species in the northern Rocky Mountains.

Conservationists and wildlife managers can learn much from mountain lions about the web of biodiversity that is in desperate need of protection. The story of the puma is fascinating for the lessons it can afford the protection of all species in times of dire challenge and decline.